Is it possible that one of the world’s most famous artists is deeply misunderstood? Yayoi Kusama is instantly recognisable for her distinct appearance—crimson bob wig, dot-patterned clothes of her own design—and for the polka dotted patterns, pumpkin sculptures and mirrored “infinity rooms” she has created for decades. She has her own museum in Tokyo, which glows like a beacon amidst drab surroundings on the northeastern fringe of Shinjuku. When her exhibitions open in galleries and museums around the world— like the current infinity room shows at the Tate Modern in London and Phi Foundation in Montreal—they are often accompanied by a PR blitz and Instagram frenzy that one critic described as “self-aggrandising silliness.”

The same critic compared the global march of Kusama exhibitions to “some West End theatrical phenomenon to be milked of every profitable drop, around the globe.” Such cynicism can perhaps be forgiven in this era when art and brand seem to be inextricably linked. But it’s an example of exactly how the complexity and significance of the 93-year-old Japanese artist’s enormous body of work can get lost in the frenzy that accompanies her status as a pop icon. “The general public knows Kusama – for heaven’s sake, she has a wax figure in Madame Tussaud’s,” says Doryun Chong, chief curator at M+. “But what they know her for is still very limited.”

M+ has set out to change that. Next month, the museum is opening Yayoi Kusama: 1945 to Now, one of the largest retrospective exhibitions of her work to date. The show will dive into nearly eight decades of work as Chong and guest curator Mika Yoshitake tease out the various threads of Kusama’s career, including the way her artistic practice has served as an outlet for a lifelong struggle with mental illness. It’s a show that makes the case that, far form being overexposed, Kusama’s work hasn’t been explored enough.

“One question I’ve gotten repeatedly is that Kusama has had so many exhibitions already, so why does M+ need to have one?” says Chong. “Given the longevity and the depth, extensiveness and impact that Kusama has had for decades, I don't think she has had enough exhibitions. She has had maybe a dozen full-scale retrospectives in recent decades. I think that’s underexposure.”

Yoshitake says the show will make it clear just how relevant Kusama’s work has been – and still is. “She speaks to all walks of life,” she says. “I hope that people get a layered and deeper understanding of her work and also her life. There’s so many works that haven’t been shown before. It will be a revelation.”

Kusama was born in Matsumoto, Nagano, in 1929. She had a difficult childhood, one that planted the seeds of her creative pursuits, and also of deep-rooted trauma that she would struggle to overcome. Her family owned a plant nursery, and she began drawing pictures of flowers and pumpkins as a schoolgirl, particularly after she began to experience hallucinations. But her mother was physically abusive, and she often sent Kusama to spy on her womanising father as he engaged in extramarital affairs, which led the young girl to become both fascinated by and fearful of sex.

Painting became an escape from her family and a way to cope with ever-intensifying hallucinations, in which she saw enormous expanses of dots that she called “infinity nets.”

In 1942, when she was 13, Kusama was sent to work in a military factory, where she sewed parachutes for the Japanese army—forced labour that gave her skills she would eventually incorporate into her artworks. After the war, she studied Japanese painting in Kyoto, but became frustrated by the strictures of traditional style and began to explore the more experimental art being produced in the United States and Europe at the time. That, combines with her increasing frustration at the strictures of Japanese life in the early postwar era—particularly as a woman—led her to leave Japan for France, and then the US, where she settled in New York in 1958. 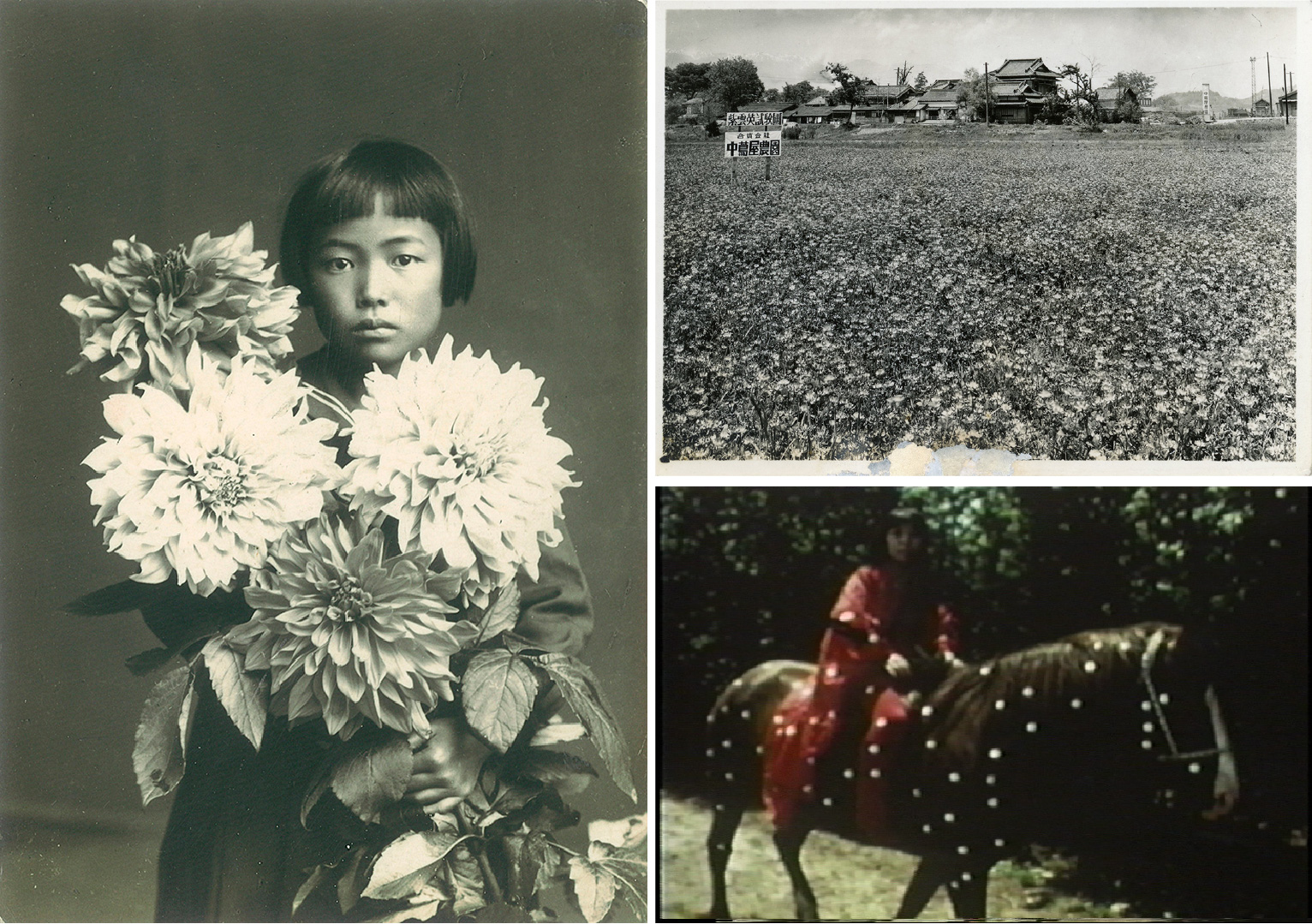 Kusama quickly found herself on the city’s avant-garde. “She was at the forefront of the countercultural revolution of the 60s,” says Yoshitake. It was an extremely prolific decade as she produced intricately patterned paintings, fabric sculptures covered with phallic protrusions, and her very first infinity mirror rooms, which were designed to give their viewers the impression of being caught in a never-ending space filled with a galaxy of colourful objects. Kusama also staged performances in which participants were covered in polka dots, a process she called self-obliteration, which was also the title of a 1967 film she made with artist Jud Yalkut. In 1966, Kusama created an installation called “Narcissus Garden” at the Venice Biennale, which consisted of hundreds of mirrored spheres that she began selling immediately after the exhibition opened – a critique of the commodification of art, one that seems uncannily prescient given the boom of the art market in the 2010s.

That doesn’t even cover half of what Kusama did in New York, where contemporaries like Andy Warhol and Oldenburg reportedly borrowed her ideas for their own practices. (Kusama also launched a fashion company, producing patterned and unusually cut garments, such as the hooded Squid Dress, which featured cut-outs that exposed the wearer’s breasts.) But very little of it was profitable, leaving Kusama in a perilous financial situation. And it was taxing on her mental health; she was often hospitalised for exhaustion, and she attempted suicide a number of times in the 1960s. “Illness is stronger than death,” she later wrote in her semi-autobiographical novel Manhattan Suicide Addict. “I want to commit a number of attempted suicides and scare my illness.”

After an intense, platonic relationship with artist Joseph Cornell that ended with his death in 1972, Kusama returned to Japan, where she began writing fiction and poetry. In 1977, she checked herself into a Tokyo psychiatric hospital, where she still lives today. But she never stopped working on her art, and when curator Alexandra Munroe organised a retrospective of her work at the Center for International Contemporary Arts in New York in 1989, her career took off once again. She installed an infinity mirror room inside Japan's pavilion at the 1993 Venice Biennale, which led to an increasing number of large-scale commissions around the world.

In recent years, the rise of social media has only amplified her popularity: “An artist for the Instagram age” is how The Atlantic described Kusama in 2017, when the exhibition Yayoi Kusama: Infinity Mirrors opened at the Hirshhorn Museum in Washington, DC. Noting that a visitor to one of the infinity mirror rooms tripped over and damaged a pumpkin while trying to take a selfie, writer Sarah Boxer wrote, “What has become almost laughably clear is that Kusama’s mirrored investigations into existentialism and infinity have become theatres of infinite narcissism.”

Yoshitake curated that particular exhibition. She says viewing Kusama solely through the lens of social media self-infatuation is a misreading of why the infinity mirrors and other works are so significant. “[Kusama] has been misunderstood as a narcissist or this kind of pop icon but that message, that core intent on why people share, is to really connect with each other,” she says. “We have to remind ourselves of why as social beings we want to share our experiences, whether it be through talking or through images.” 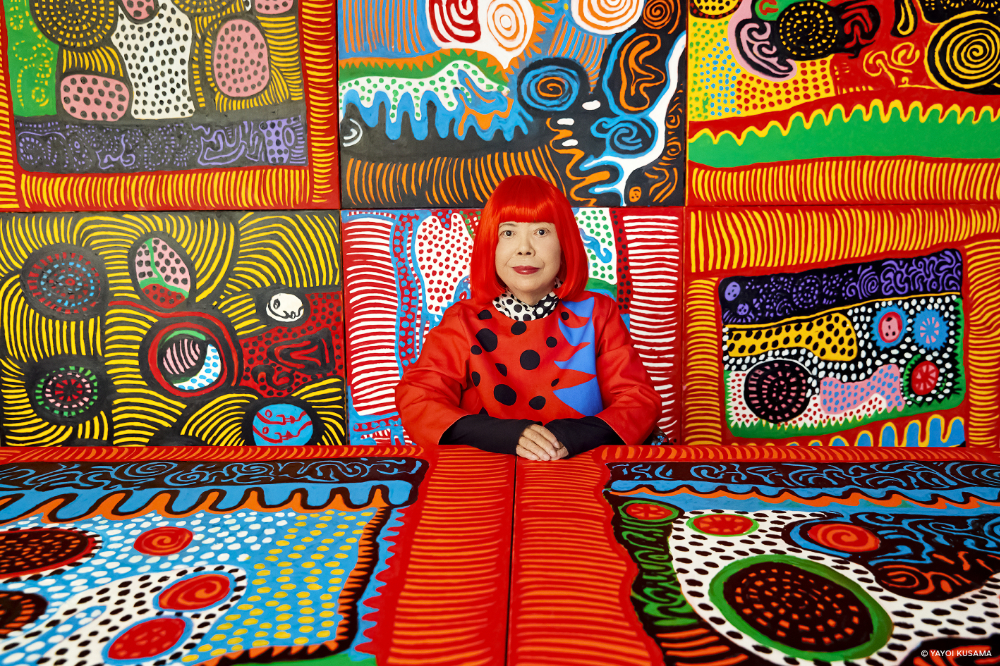 One of the reasons the Hirshhorn was interested in mounting the exhibition was because, according to Yoshitake, Kusama was an artist who had both popular appeal and potential for serious scholarly insight. “You can narrate the history of art just through this one artist’s career,” she says. Surrealism, Japanese-style painting, abstraction, minimalism, environment art, performance – Kusama's body of work spans all of these styles. “Throughout the avant garde, if you track all the movements, she’s there. Her role is just incredibly relevant within all worlds. You can’t say that for many artists.”

Kusama appealed to M+ for similar reasons, with the added significance that it was a newly opened museum with the goal of recentering art historical narratives in Asia – making the M+ show a potential counterpoint to the many Kusama exhibitions that have been held at American and European institutions. “We really wanted to put a spotlight on her Asian or Japanese period,” says Chong. When she returned to Japan, he notes, “she wasn’t even at the mid-point of her life or career but the rest of it tends to be written as a postscript.”

Chong invited Yoshitake to begin working on the M+ show in 2018. Over the past four years, they have developed an exhibition that examines Kusama’s career thematically rather than simply chronologically. One section examines the concept of infinity, starting with Kusama's very first Infinity Net painting, "Pacific Ocean," which was inspired by her flight from Japan to the United States in 1957, and ending with a 2011 work called “Transmigration,” which deals with the aftermath of the Tohoku earthquake and the Fukushima nuclear disaster. Another section explores the idea of radical connectivity, which underpins the Self-Obliteration series of works that began in the 1960s.

Other sections deal with the relationship between the natural and cosmic worlds in Kusama's art, the lurking presence of death, as well as the upbeat, colourful messages of love and hope that serve as a counterpoint to that pervasive sense of doom. There is also a section of self-portraits and three new works made this year: two especially large pumpkin sculptures, a mirrored kaleidoscopic room, and a new installation commissioned by M+, "Death of Nerves," with textiles that drape down two storeys.

Running through all of this is the idea that art is life, connection and healing, all at once. “[Kusama’s] life is about survival, not just making these happy paintings,” says Yoshitake. “Without painting everyday, she would not be alive. Her work is a source of healing.” Kusama has said on a number of occasions that the process of making art is the one way she has been able to live with her mental illness, which is one of the reasons she continues to be so prolific even into her 90s.

Yoshitake says she had always been reticent about exploring the role of Kusama’s mental health in her work. “I didn’t want the public to pathologise her and see her artwork as a reflection of her mental illness,” she says. But the pandemic convinced her otherwise. With so many people struggling with their own mental health after years of unpredictability and isolation, Kusama’s use of art as a way to cope with her own illness feels particularly relevant. “That idea of connection [in her work] is quite relevant to this period of isolation we’ve all experienced,” says Yoshitake.

It’s another layer that the curators hope visitors to M+ will be able to add to their understanding of Kusama. “All of these things make her a complex figure and that complexity is the reason she is a global cultural icon at this point,” says Chong. “Not because she is a quirky lady with a red wig and a polka dot dress. There is something much more fundamentally transformative in her person, her art and her philosophy.”

The Emotions of a Good Museum

What Happens When Art and Design Collide?

The World's First Art Depot: An Art Archive with a Difference