The Arts and Heritage: A Perfect Combination?

With the right design approach, heritage buildings can be used to support arts and culture.

The Arts and Heritage: A Perfect Combination?

Amanda Wei’s newest art space is about as far from a white cube gallery as you can get. Perched halfway up Victoria Peak, on a narrow path accessible only by foot or electric buggy, Chatham Maison opened last year inside a 95-year-old villa that has served as a private residence, a film set and a school.

“We had always dreamed about filling an old house with big pieces of art,” says Wei’s partner, gallery director PYT. When they heard that property owner Sino Land was looking for someone to rent the historic building, they jumped at the chance. “There were a lot of renovations to do,” she explains. Because the villa is listed as a Grade II heritage structure, they had to make sure the work didn’t alter its historic integrity. “Everything had to be done properly.”

But the effort has paid off. The gallery offers a rare glimpse into the elegant lifestyle of Hong Kong’s colonial elite, with deep verandahs lined by wrought-iron railings, high ceilings and tall windows with views over the city. And in a place that has lost so many historic structures, it has revived a building that still holds significance for many people. “After the renovation, we had guests who came because they were students here,” says PYT. “They were so happy to see it again.” 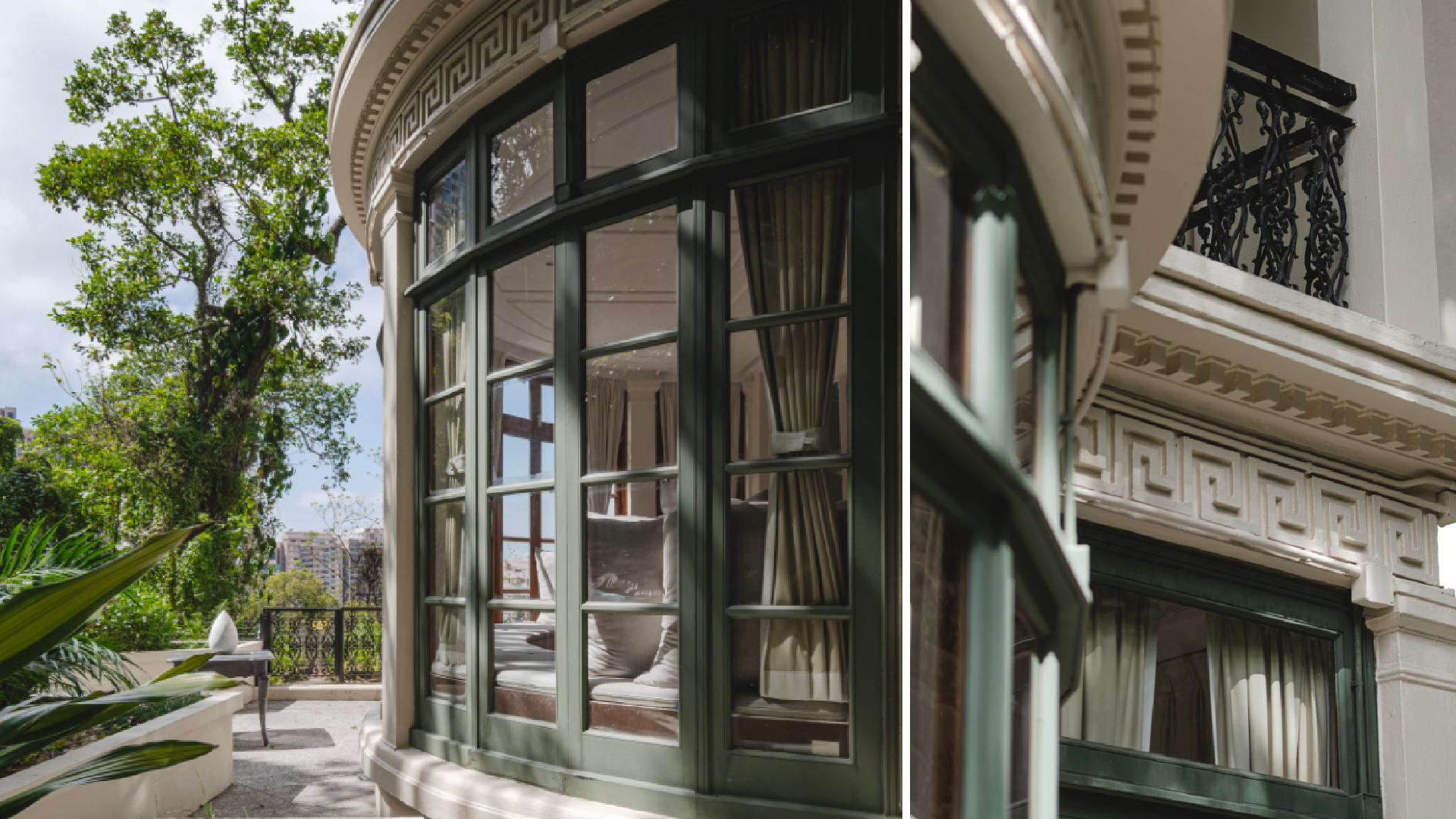 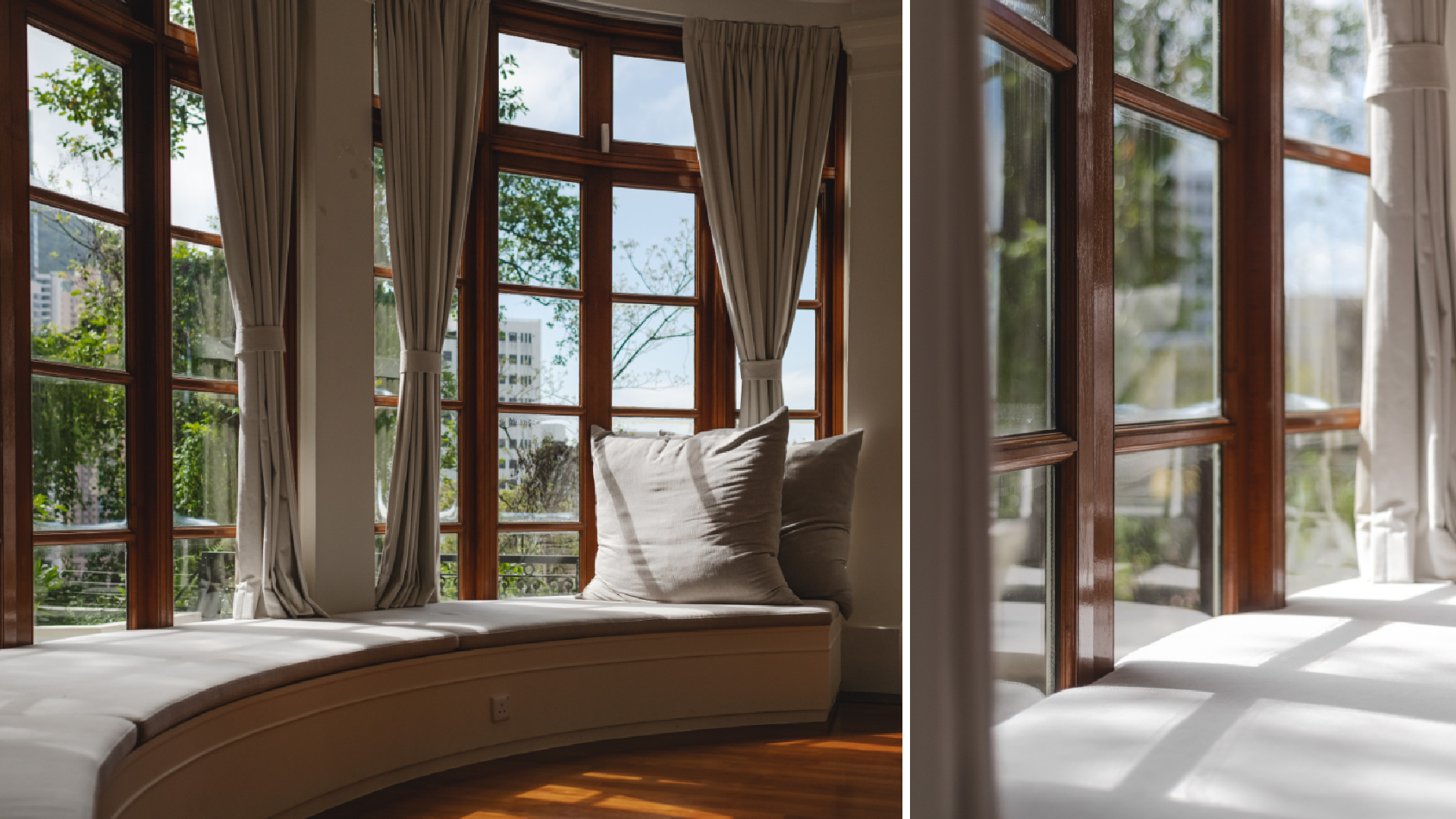 It wasn’t so long ago that Hong Kong paid no heed to its heritage. Nearly the entire city has been redeveloped several times over the course of its history; take a look at an old photo of neighbourhoods like Central, Wan Chai or Tsim Sha Tsui and you’ll see a city that is entirely unrecognisable today. Perhaps not coincidentally, Hong Kong was often dismissed as a cultural desert where there was little room for artists and performers to express themselves; a city that ignores its built heritage neglects its culture.

Today, all of that has changed. A long fight by conservationists and community activities has opened Hong Kong’s eyes to the value of its built heritage, and there are now more heritage initiatives than ever before. At the same time, art and culture has flourished as new workshops, galleries and performance venues have opened, often enough in revamped historic buildings that may otherwise have been demolished. From artist studios housed in old factory blocks to venues like Comix Homebase, Oil Street Art Space, PMQ, the Cattle Depot, Fringe Club, Asia Society Hong Kong Center and Tai Kwun, there is a natural synchronicity between heritage conservation and a lively arts scene. 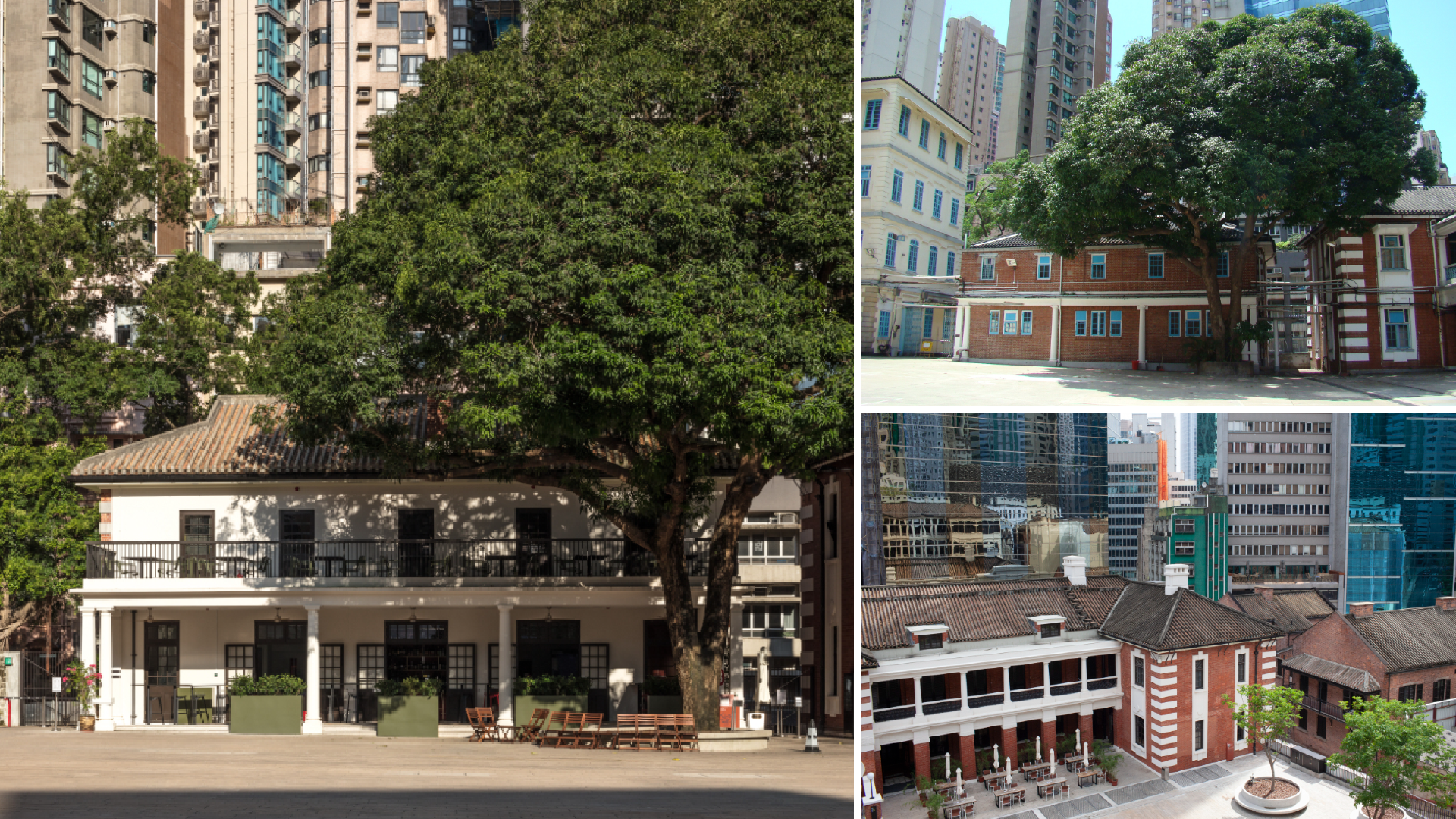 But converting a historic structure into a cultural venue is not easy – it’s a design challenge like few others. That’s especially true in Hong Kong, where strict building regulations mean that significant alterations—such as adding lifts and extra staircases—can sometimes be necessary to open an old building to the public. Conservationists warn that it takes a lot of time, money and good planning to successfully give historic buildings a second life. “It’s exceedingly complicated,” says Fredo Cheung, an architect and heritage conservationist who teaches at the University of Hong Kong.

But the payoff is worth it. “Hosting an art event in an historical venue makes the event twice as interesting,” says artist Daphné Mandel. Five years ago, she staged an exhibition inside the Museum of Medical Sciences, an Edwardian-style redbrick building in Sheung Wan. Built in 1906, it originally served as a bacteriological lab that found ways to prevent contagious diseases that had long ravaged Hong Kong. Mandel says many of the exhibition’s visitors were unaware of the building, so it was a chance to open their eyes to an overlooked aspect of Hong Kong’s history. On top of that, mounting works in a historic structure forced her to be creative. She wasn’t allowed to drill into the walls, so she devised a system of bamboo scaffolding and nylon threads that hung from the museum's wooden ceiling beams. “The challenges that came with using a heritage venue actually contributed to making the art installation more rich and interesting,” she says.

In Wan Chai, Connie Lam has had a similar experience at Comix Homebase, an arts venue housed in a row of historic shophouses on Mallory Street. “It’s a precious asset,” says Lam, who is executive director of the Hong Kong Arts Centre, which set up Comix Homebase after the Urban Renewal Authority renovated the old buildings. Like Mandel, Lam notes that a certain amount of creativity is required to operate in the constraints of a historic space. “Many of our arts and cultural programmes have to be site-specific to echo with the surrounding environment, while all the setups have to be free-standing,” she says.

That’s just a small part of what needs to be considered before any conservation project, according to Fredo Cheung. “Not all historic buildings are suitable for use as gallery spaces or cultural venues,” he says. Those that work best often have high ceilings and open floor plans, like the Fringe Club, which opened in 1983 inside a former cold storage depot built in 1892. Like the Fringe Club, the most successful projects are also centrally located. “Location is everything,” says Cheung. “If you look at projects that fell through, it had a lot to do with the location.”

He says there’s another factor to consider, too. “There’s the question of how it connects to the local community. When we talk about conservation nowadays we talk about sustainability, and that’s not just superficially giving a building another lease on life. You have to think about how it connects with the local community, how it’s relevant, so that the community contributes to your space.”

Lam says Comix Homebase owes a lot of its success to low-key activities like theatrical performances and film screenings that draw people from the surrounding neighbourhood. By contrast, Cheung points to the failure of the Savannah College of Art and Design, which painstakingly restored the former North Kowloon Magistracy in Sham Shui Po in 2010, only to close its doors a decade later when enrolment failed to meet expectations. High tuition was blamed for keeping many local students from attending the school. 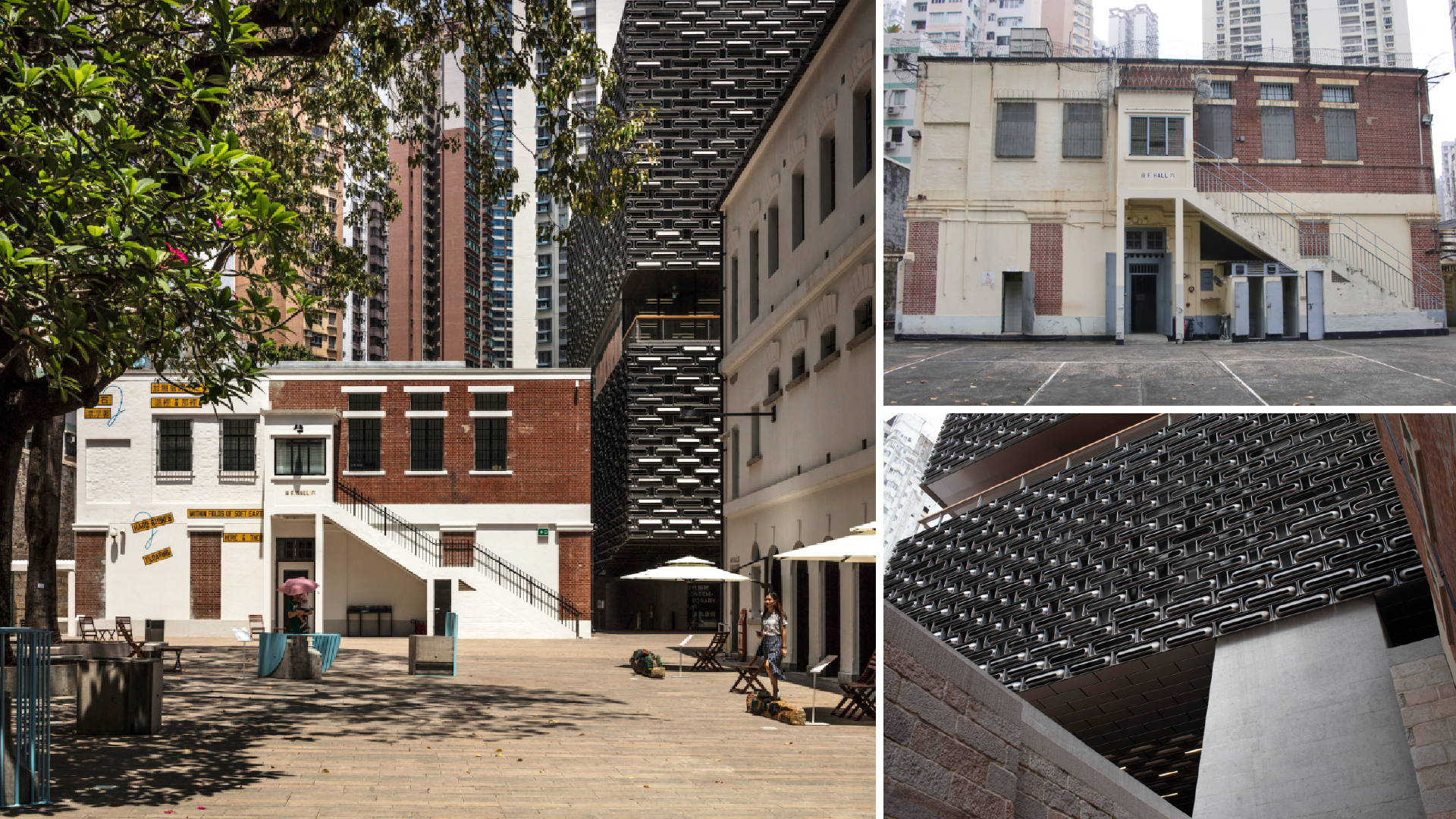 Even with a solid plan, the work that follows is often long and painstaking. When the Hong Kong Jockey Club hired British architects and heritage consultants Purcell to develop a conservation plan for the former Central Police Station and Victoria Prison compound, it took a full decade before the project was completed. The result is Tai Kwun, a densely-packed collection of 16 historic buildings, with two new buildings and a master plan designed by Swiss architects Herzog & de Meuron. Steve Phillips, an associate partner with Purcell’s Hong Kong office, calls it “arguably the single largest project of its type that Hong Kong will ever do.”

The first challenge was to bring the historic structures up to code, in terms of structural load, accessibility and fire safety – “by no means a straightforward process,” says Phillips. As with so many old buildings in Hong Kong, the original plans had been lost during World War II, so engineers and architects needed to analyse the structures to find out how they could sustain the added stress of being accessible to the general public. It’s a delicate procedure that can easily go wrong, as became clear in 2018 when part of a married inspectors’ quarters, built between 1862 and 1864, collapsed during restoration work.

The architects also needed to make the difficult decision of what to preserve and what to demolish. Some postwar additions to the buildings that didn’t add value to the site were scrapped, but Purcell lobbied to save F Hall, a prison reception centre built in 1931 that was originally slated for demolition. “[It] had a high social significance,” says Phillips, because it was the first place encountered by many newly-convicted prisoners, and it was where they could meet their friends and family during visitor hours. It now serves as an exhibition space for JC Contemporary, Tai Kwun’s contemporary art gallery. 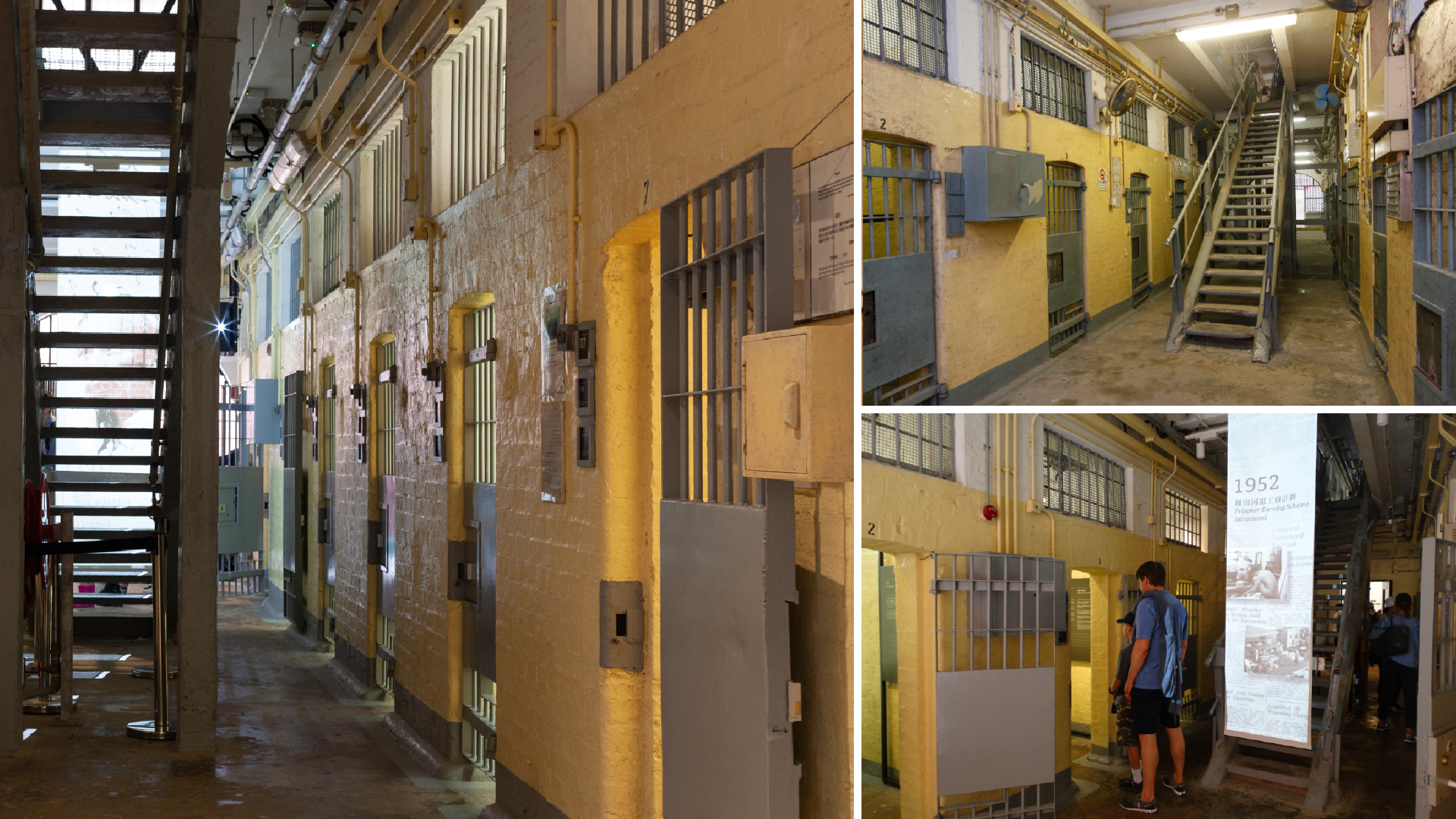 There was also the question of how to incorporate new structures into the site. The new buildings designed by Herzog & de Meuron are stark cubes that bear no resemblance to the Victorian-era historic buildings on the site – a deliberate strategy that falls in line with current conservation principles, according to Cheung. “The point is not to mimic the old but to distinguish the old from the new,” he says.

Phillips says another difficult choice was to install a footbridge linking Tai Kwun to the Central-Mid Levels escalator link. “This proposal was controversial, because the bridge intruded on the view of the police headquarters building,” he says. “But it also affords easy access for visitors at a point that offers good connectivity to adjacent districts and does so in a way that is inherently safe.” He notes that more than 40 percent of Tai Kwun’s visitors now use this entrance.

Those were just some of the complicated choices made during the long and arduous process of restoring and renovating the old police and prison compound. Then came the task of keeping its heritage alive. “For us to repurpose the site for new uses, we must always bear in mind the significance and cultural values–the heritage values—of the site,” says Anita Chung, Tai Kwun’s director of heritage. To that end, the compound has dedicated heritage programming that explores its history and significance. That includes exhibitions on Tai Kwun’s history, but also more oblique references to its heritage like a show on Kwan Tai, a god of brotherhood worshipped by police and criminals alike.

Chung is now planning future programmes that will bridge Tai Kwun’s heritage with contemporary issues. “It’s not just about preserving something,” she says. “Heritage also has to be about continuity, the continuity of memories to connect with the present and future generations.”

Before returning home to Hong Kong, she worked as a curator in Scotland and the United States, where it is not unusual for cultural institutions to occupy centuries-old buildings. “We just take it for granted,” she says. Things are different in Hong Kong. “There is a lot of consciousness among the community here. The meaning we ascribe to the place is much deeper than if you have a neoclassical building overseas, because, in Hong Kong, the urban change is so fast. There are not many older buildings that reflect the development of the city. So when there aren’t many of them left, [the ones that remain] are considered extremely precious.”

That’s a big part of the appeal of Chatham Maison, whose visitors pay a fee for a tour and tea service. After looking at the artworks and the architecture, they make their way up to the roof, which has a view of the city. They are often surprised to find plants growing out of the walls. It’s just part of being an old building in Hong Kong – and perhaps a metaphor for the way old buildings are not relics but living parts of the present.

What Placemaking Can Do For Hong Kong

The Emotions of a Good Museum

Rooted in Nature – Minimalism According to Sun Dayong