The Business of Problem-Solving — Design According to Martin Darbyshire

The award-winning founder and Chairman of tangerine discusses AI, recent projects in Asia and how open-mindedness is key to the design process.

tangerine’s diverse design projects have included everything from smart baby monitors, to modular work booths, to this refrigerator for LG. Photo courtesy of tangerine

Team tangerine, on their annual punting trip in Cambridge. Photo courtesy of tangerine

What do the world’s flat-bed airline seats, a collaborative robot and the flagship store for a top Korean beauty brand have in common? They were all designed by tangerine—a renowned, London-based design consultancy with studios in South Korea and Brazil that’s crested a diverse portfolio of innovative projects for more than 30 years. Headed by Martin Darbyshire, tangerine specialises in brand strategy, product innovation, industrial and experience design.

We recently caught up with the award-winning designer for a chat about everything from automated aircraft to AI to Mario Bellini’s typewriters to what makes a great design innovator. 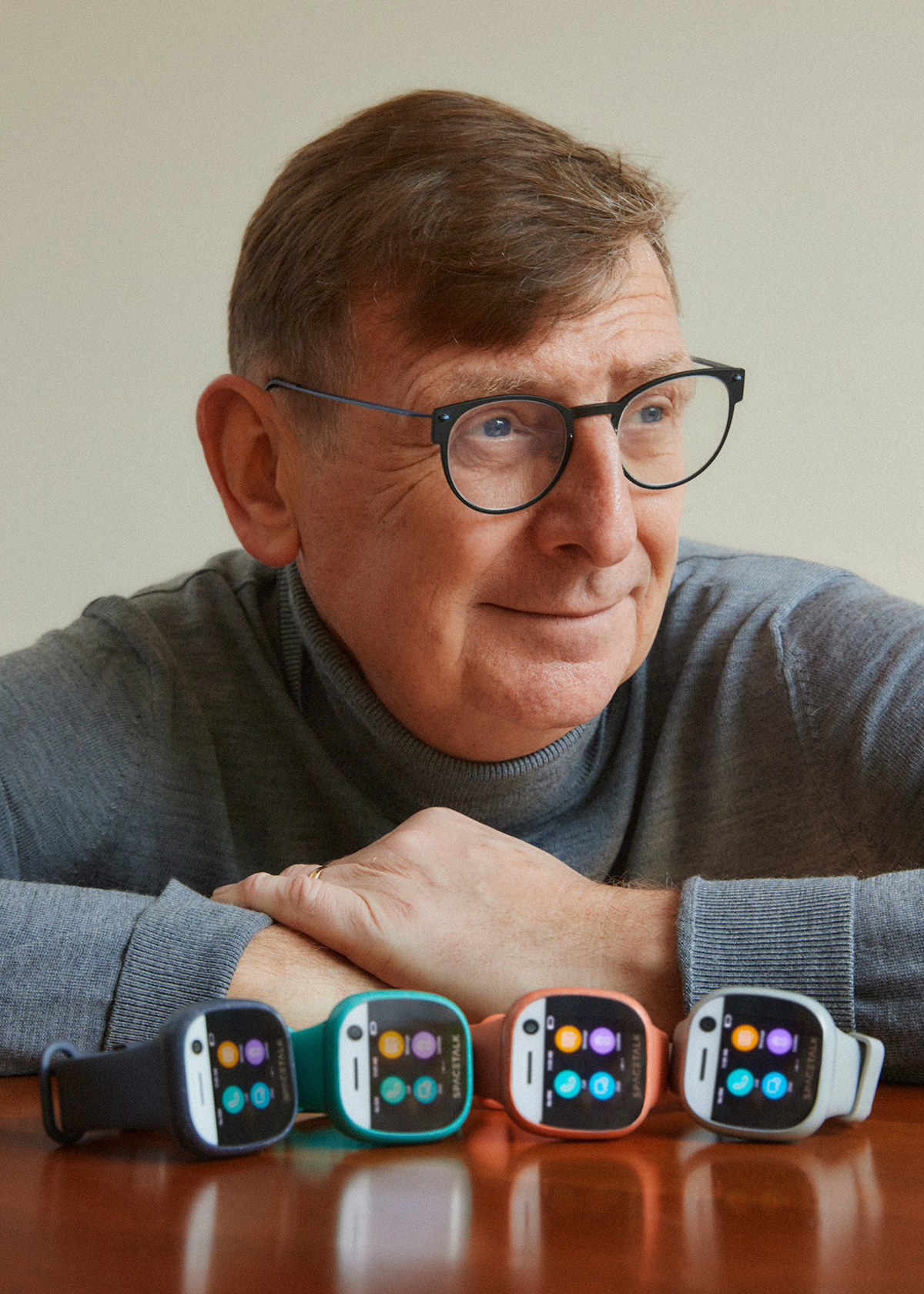 Although he studied industrial design at London’s Central Saint Martins, it was a visit to the Museum of Modern Art in New York that inspired Darbyshire’s to be a designer that pushes the boundaries. MOMA was exhibiting the works of celebrated Italian designer and architect Mario Bellini, who is best known for his sleek, progressive designs in furniture and electronics. Darbyshire describes the exhibition as “transformative” and recalls how seeing a collection of the wooden mock-ups of the early typewriters left him with no doubt about his future aspirations.

“I think that sealed it for me,” he remembers. “That was the thing that said, ‘yes, I really want to do something like this.’ It was an incredible exhibition, and I’ve still got the booklet even though it was in the late 1980s.”

A couple of years later in 1989, Darbyshire went on to found tangerine with university classmate Clive Grinyer. They were joined two years later by Jonathan Ive and Peter Phillips, just as the company began to gain visibility. Darbyshire says that the focus of the company’s early work was on physical products such as consumer electronics, as well as on strategic projects. Early work for Apple Inc put them on the map, with their concepts for the future of portable computing, under Project Juggernaut.  But a major turning point for the business occurred in the late-1990s, when the company won a pitch to help British Airways create the world’s first flat-bed in business class.

“We had moved from the design of small-scale physical products largely for consumer markets to designing something that became more a part of an experience, more a part of a larger system that delivered significant change for the business,” he recalls.

tangerine’s diverse design projects have included everything from smart baby monitors to modular work booths, and, like Bellini, Darbyshire’s clients comprise some of the world’s most well-known brands. In addition to Apple and British Airways, tangerine has delivered design solutions to LG, Huawei, Sky, Cathay Pacific, Nikon, Samsung and Toyota, to name a few.

For Darbyshire, there isn’t a single answer to what makes a great design innovator, nor is there a one-size-fits-all approach to a design project.

“We as designers are about solving business problems ranging from how the business might use design and what design can do for the business through to the specific execution of something once you’ve determined what a problem or a challenge might be,” he explains.

“Design and innovation are utterly driven by context. Design is so diverse now and the kind of work we might be doing is so diverse that you need to really stand back and try different things and learn from those approaches.”

Right: tangerine’s diverse design projects have included everything from smart baby monitors, to modular work booths, to this refrigerator for LG. Photo courtesy of tangerine

According to Darbyshire, a certain level of open-mindedness is key to the design process.

“Every time we take on a new project, which moves us into a different space we have to learn about it,” he says. “To some degree it’s feeling as you go, discovering as you go. Design is never linear; you are always going to be circling back to the question, it’s always iterative.”

He continues: “You always discover something that is really surprising that you didn’t expect, and you normally find out things that were unexpected along the way.”

An outstanding end-product, he explains, is one that “genuinely makes something better and not just different,” while fitting seamlessly into a user’s daily life.

“A very important criterion of successful design is that you don’t notice something,” he says. “It’s so right that you don’t notice it…The interaction you have with something becomes utterly intuitive. That’s when design is really working. When virtually anybody who has never had a dealing with a thing is capable of starting to use it in an appropriate way, that to me is a very important aspect of design.”

In addition to maintaining an office in Korea, tangerine regularly works with clients in China, including Volkswagen Group China, with whom the company is collaborating on its designs for its eVTOL “Flying Tiger” prototype—a fully automated aircraft that resembles a flying car/helicopter hybrid and will be able transport four passengers at a distance of up to 200 kilometres.

“They’ve [Volkswagen China] revealed the exterior and they’ve kind of shown the fundamentals of what the vehicle will be like in terms of the arrangement of the propellers and the overall format, but they’re not really at this point talking about what the internal design will be like and how is that responding to the needs of different users in the right way, or about the system that guides it,” he adds.

“I think for us it’s a great project because it fits with the spectrum of our skills, from not just the design of the physicality of the thing, but you’ve also got to think of the systemic requirements and what might somebody be doing with it, what could a host of end-users be doing with it, and how do you get that thing to do it right and work really, really well.”

tangerine has also teamed up with scientists from South Korea’s KAIST University to design a new RB Series collaborative robot or, cobot, for Rainbow Robotics. On its website, the innovative robotics company describes the cobot as easy to operate and designed to implement simple, repetitive tasks, which make it ideal for the service and manufacturing industries.

“The Korean government and the Korean economy are investing really heavily in AI and robotics, because they see that as the future of their economy,” Darbyshire also believes they are undoubtedly really, really crucial components for the development of every economy.”

He thinks that robotics and AI are becoming more prevalent around the world, and that eventually robots will replace most manual labour.

“They [robots and AI] are going to have a very big impact,” he says. “AI already influences so much already.”

The Business of Problem-Solving — Design According to Martin Darbyshire